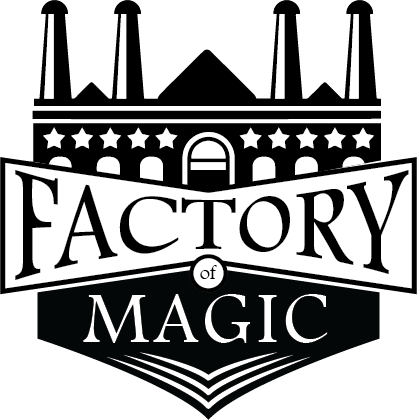 < All Articles
An Interview with Katherine Rhodes, Vice President of The Magic Circle

Welcome to The Factory Of Magic blog. For our first edition we present to you an interview with Katherine Rhodes, Vice President of The Magic Circle, who was answering questions regarding improv comedy by fellow comedian Ali Hannon.

Katherine kindly took time out of her busy day and answered some questions for me. If you’re anything like me, you have always been intrigued by The Magic Circle and wondered what secrets they keep. I think you will enjoy this interview. Almost as much as my dog and my partner did.

Katherine, I have a few questions and I hope you will indulge me with your deepest, darkest secrets, most intimate and private thoughts, and weirdest …wait a minute…wrong interview. That’s the other one we were doing.

So, Katherine, can you just start by telling me a little bit about yourself. I mean, you do magic, and you can fly. But you’re not a carpet. So, who are you?

K - “I’m Katherine Rhodes MIMC, I’m a professional magician, I’m older than I look and I fly (aeroplanes, not carpets, I have a pilots licence) as a hobby. I also make puppets and love Lego.”

You’ve recently been elected Veep of The Magic Circle, and it appears that you have joined another woman, Megan Swann, who is now President. Did you cast a spell on the men? What happened? I thought that magic was a male dominated profession.

K – “Ha! Yes, I have just been elected Vice President of The Magic Circle. Megan and I ran in the recent elections and I’m delighted to say we were both elected by a very large margin. Magic is still a very male dominated profession but, thankfully, a large majority have realised that it’s time to move forward.”

Is there also a magic oval for magicians who are not good enough for the circle?

K – “No, there’s just the wastelands.” (picture her enigmatic smile as she says this)

You joined an improv online workshop last year. Was this for personal or professional reasons?

K – “Personal. Due to the nature of what I do I have to do a fair amount of improv anyway but I’m always alone, it’s completely under my control and direction. I’ve always loved improv and wanted to see what it would be like doing it as part of a team rather than solo. The dynamic is completely different and it’s been a fascinating and very enjoyable journey.”

How has learning more about improv comedy changed what you do?

K – “In a professional capacity, very little. When performing, parts of my show that are improvised will depend on what an audience, or individual member, says or does in that moment and I can then run with it as appropriate. I don’t have a section set aside for an improv bit, it’s always unexpected. Because I work alone I can only work with myself in those situations so it hasn’t really changed what I do there but my delivery is, I think better and maybe my approach to those moments has improved. What it has changed is how I interact with other performers if we’re, for example, workshopping a piece for a show as I think I am now a more generous listener and more accepting of other input than I used to be and have an improved set of skills to adapt and play with what others bring to the table.”

How does comedy fit into a magic show?

K – “Sometimes badly! It is completely down to the individual performer. There are some really funny individuals who happen to do magic, there are some who do magic and present it in an amusing way and then there are those that do magic, think they’re funny (or think they have to be funny) and really aren’t but somehow just can’t read the room! Comedy is often structured and disciplined but it has to feel and appear natural and organic, if it’s forced and shoe-horned in just for the sake of it there’s a very high probability it won’t work and an audience can sense that. It ends up feeling cringey. Improv skills are fantastic at enabling you to explore and recognise where the funny belongs.”

Do you think you are now funnier than other magicians? If not, why not? You should be after all these lessons.

K - “‘Now’ funnier? I was funnier before! (picture her cheeky grin) I certainly think the courses I have been on have helped expand things in a positive way. It’s a bit embarrassing talking about myself this way but I was known as a funny magician anyway but the skills I have learnt from the courses have enabled me to listen and react in a slightly different way so I do think the improv parts are presented in a more polished way.”

Do you think Ali has special magical powers? Would you consider pulling them out of a hat, or perhaps cutting them in two?

K - “Cutting them in two? Absolutely not, there would be the risk of those powers escaping or being damaged and they are too valuable to risk harming! I do think Ali has a particular type of magical power as the ability to bring a random bunch of strangers together into a cohesive unit in such a short space of time where everyone is so completely at ease and turning out great work is no mean feat.” (picture my knowing smile and nods)

What is the funniest thing you have done during one of the improv workshops and would it be legal in real life?

K - “Oh gosh, I don’t know. There have been so many laugh out loud moments and several where I’ve not been able to breathe through laughing too much. The thing with improv is that it is in the moment and, no matter how wonderful a moment is, another is along to replace it almost straight away. Whilst I can’t recall any specific moment I’m pretty sure the answer to the second part is no, it’s probably not legal!”

Do you think other magicians would benefit from learning about improv comedy?

K - “Absolutely. I have taught rudimentary improv skills to the Young Magicians Club in the past. I don’t think it is so everyone and everything can be funny but because the skills you learn from improv can help you deal with unexpected moments. And whether you like it or not, no matter how rehearsed you are, if you’re performing, at some point something unexpected will happen. Improv skills teach you how to have the confidence to deal with such situations in the moment.”

I hear you have formed a troupe with other, less magical, but equally hilarious improv performers. Can you tell us about that?

K - “Yes, a group of us from one of the courses have stayed together and continued as a proper troupe! I am extremely proud to be one fifth of Grin and Tonic with four other women who are hysterically funny. We’ve only done online performances so far but there are plans to be stepping out into the real world and I’m very excited about that.”

K - “That is an impossible question to answer as no magic trick on its own is funny. It’s the performer that makes it funny. You can see the same effect performed by two different people, laugh your head off at one but be bored to tears with the other.” (picture me thinking that there must be at least one magic trick that involves a fart)

If you could share the most important thing you have learned from Ali, as a performer, with others in your field, what would it be?

K - “Listen. And then really listen. As solo performers it is so easy to focus only on yourself and your thoughts. The more you do it the more insular you can become. By being forced to work with others you have to be more generous as you can’t control everything and if there’s a funny moment approaching, it may just be out of your reach and another performer gets that moment. At first it’s annoying but developing that team work approach and realising it doesn’t matter who gets the laugh because you all share the moment. It may sound like a small, trivial point, but it’s a real revelation for the solo performer.”

Thank you for your time and patience. If you think I missed anything important, now’s your chance.

K – “Can’t think of anything. If anyone has other questions they want answered they can send them in. For now though, it’s gin o’clock.”

You can catch Katherine at her residency at Simon Drake’s House Of Magic in London.

Explore More
Magic Workshops
Our workshops are aimed at young people and are designed to teach the fundamentals of magic.
Read More
Thoughts Of A Wedding Magician
Lord Harri talks about the joy of performing on the greatest day of your life.
Read More
Top Tips When Applying For Funding
Funding application tips
Read More

© The Factory of Magic Ltd